Making of an HTML5 game: Forest

I wrote earlier about Forest, a meditation game I made for the Super Friendship Club's Mysticism Pageant (you can play it here). That article covered my motivations and inspirations, but not the details of how it was put together. This article covers the details.

The game uses HTML5, specifically the <canvas> tag for graphics and the <audio> tag for music. The world is procedural, which means that instead of using photoshop to paint the levels by hand I made some algorithms to generate the world. This has two advantages:

I worked on this in the evenings and on weekends for about three weeks during the pageant, and then spent a couple more weeks cleaning things up and polishing it after. It is about 1500 lines of JavaScript.

I had the good fortune to be able to work on the code for generating the trees while sitting on the porch of a cabin near Lake Tahoe. It was quite relaxing, reclining in the shade of towering pine trees while making a virtual forest.

The normal way of doing procedural trees appears to be L-systems, but that seemed too complicated. I did something simpler: 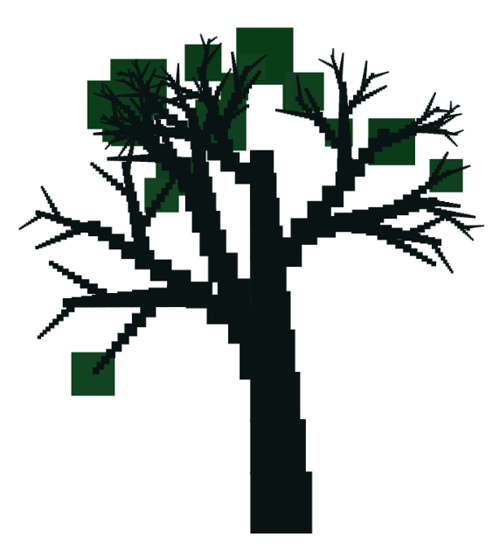 (I didn't bother including it in the sample code, but there's also a little logic to adjust the color if the grass is in a sunbeam)

The dirt has randomly-sized dark and light rectangles layered on it:

I started out just drawing the entire canvas from scratch in every frame, using fillRect() calls for almost everything (remember, the grass, dirt, trees, and player are all made out of blocks). Performance was terrible.

Since the trees don't change, I looked into pre-rendering them to off-screen canvas elements, then using drawImage() to copy them into the main canvas. Performance testing suggested that at 30 FPS I could get about 35 800x600 drawImage() calls. This is more than enough, since I only need 3 layers of trees to give enough depth. 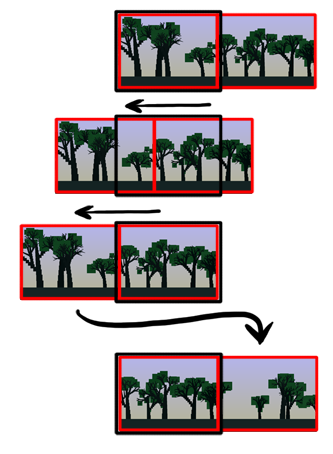 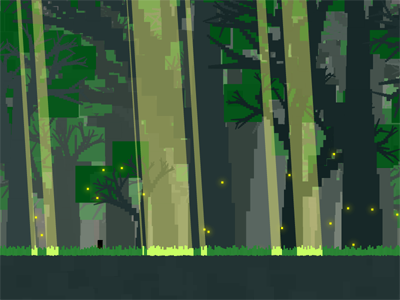 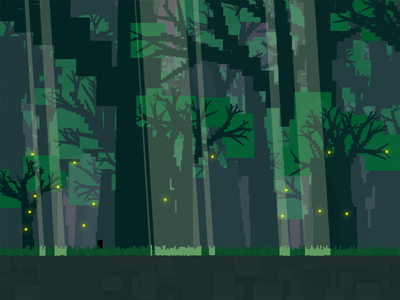 In the end, I compromised and ended with with a somewhat cooler version of #1: 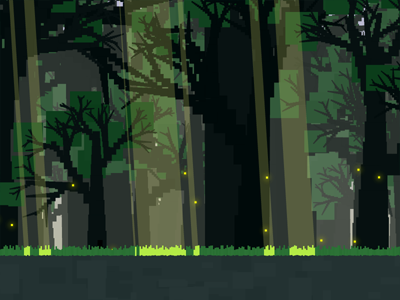 I browsed through Google's repository of web fonts until I found Tangerine Bold, which I think goes very nicely with the theme.

I wanted to use JavaScript to render the text into the canvas directly, but I couldn't find a way to make it blocky. The obvious solution is to draw the text at a small size so the pixels are large in relation to the text, then enlarge the image. However I couldn't stop the browser from doing interpolated scaling, so the text ended up blurry instead of blocky.

I gave up on JavaScript for this and used Python instead to pre-render the text into images. I also added a slight drop-shadow to help the text stand out from the background. Using images instead of rendering from JavaScript adds about 300 KB of data to download, but at least it works.

I wanted the movement to have a specific feel:

When space is held, there's an acceleration which decreases as the player's speed approaches the target speed. Rapidly clicking space builds up an acceleration boost which allows running. Finally, drag slows the player down quickly from high speeds but has little effect at slow speeds.

The acceleration from tapping space once is so small it can barely be noticed. This gives a bad experience if the player just taps space once at the start of the game because it looks like nothing happened. To fix this, if the player isn't moving and space is pressed, the speed jumps straight to the target speed. This provides nice feedback and makes it obvious that pressing space did something.

Even though the game only lasts five minutes, the metrics made it obvious that players were leaving before finishing. Based on this, I added the "Breathe" and "Relax" reminders in the middle to hint that the game doesn't just run on forever. Metrics showed an improvement in the number of players reaching the end after this change.