The Super Friendship Club runs month-long game pageants where participants make games related to a theme. For the Mysticism Pageant I made a meditation game called Forest.

Most games are about doing: building empires, killing monsters, driving fast. This game is about not doing, about breathing. There's no score, no goal. It isn't fun like other games, but is hopefully enjoyable. It's not really a game, but that's the best word I can come up with. ("Experience" would be more accurate but that sounds silly and has too many syllables) 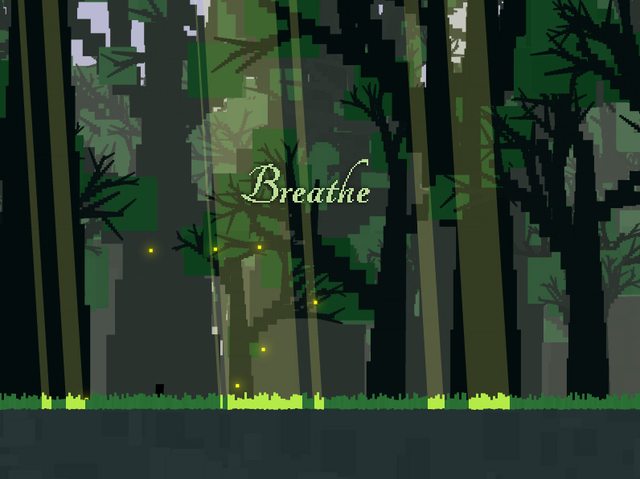 I wanted to do a game about meditation but mediation usually involves closing one's eyes and sitting very still. While I was struggling to figure out how to translate this to an interactive game, my wife and I attended a meditation workshop with Thich Nhat Hanh. One of the techniques we practiced was walking meditation, and I saw this was the solution: One does not need to be sitting with closed eyes in order to fully experience the present moment. This became the concept I would try to communicate to the player.

I loved the first half of pOnd, and wanted to make something similar to that, but taking the subject more seriously. I think pOnd's ending cheapened the experience, as if the creators didn't really believe in what they had started. They had a brilliant mechanic, though: encouraging the player to synchronize their breathing with their actions is powerful.

The forest spirits that are so prevalent in Miyazaki's films kept popping into my thoughts. Not only did they fit the mysticism theme well, they improved the game in several ways. Their appearance (or startled flight) provides feedback to the player. They move with the player's breath, deepening the synchronization. Finally, they provide a simple narrative hook for the start of the game.

I decided the core mechanic would be walking through a forest by pressing space as you breathe in, releasing as you breathe out. A quick prototype showed this was relaxing and engrossing.

At first I wanted to make the player figure this out on their own, to encourage a sense of discovery. The original version of Forest dropped hints about going slow and only showed the instructions about synchronized breathing if the player slowed down. If they didn't slow down, there was a "failure" ending which hinted at the player being too hurried. Metrics revealed that almost no one went slowly enough, though, so I gave up on that. Now everyone gets the breathing instructions and there is no way to "fail."

I wanted there to be an "aha!" moment when the player stops running and starts walking slowly. I intentionally try to mislead the player at the start by telling them how to run, hoping to get the player to experience the contrast between running and then relaxing. However, I deliberately avoided artificially increasing this contrast by changing the way the game is rendered when running. It would have been easy to decrease color saturation, draw trees in less detail, etc. but that wouldn't be true to the theme. The whole point is that the player notices more when walking, not that the game shows them more when walking. The detail has to be there all along to be authentic and not just a fake effect.

When making most games, much time is devoted to finding pleasurable reward loops. Basic breathing meditation is already enjoyable, though, so the game just tries to nudge the player to try it. I avoided adding traditional reward loops on top of this, partly because this risked smothering the fragile pleasure from meditation, and partly because I was concerned about replacing intrinsic motivation with extrinsic motivation.

Many of the best games teach the player something, improve them in some way. This is something I aspired to. Being conscious of one's own breath is a powerful relaxation technique that can be used anywhere. Learning to relax and release stress is important skill that most people can benefit from. I have no illusions about achieving wide-spread public health gains via this game, but I do hope that it helps at least one person lead a more relaxed life.