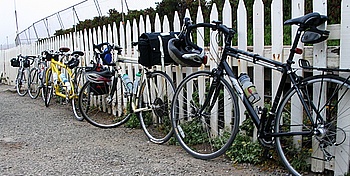 The weekend after our Point Reyes trip, Yana and I did an overnight bicycle trip to the Pigeon Point Lighthouse.  We wanted to join a friend from work, Piaw, on a 3-week cycling tour of Japan which he was organizing at the end of the summer.  Every year before he tours, he organizes a prerequisite shakedown ride so we were joining him for that. Pigeon Point is his usual destination for these shakedowns.  It lies on the coast between Half Moon Bay and Santa Cruz, about 50 miles from Silicon Valley, and there’s a youth hostel (with a hot tub overlooking the Pacific!) so it is an ideal destination for an overnight bike trip.

The hostel is quite popular (at least during the summer months) and we were only able to get reservations for Sunday night.  It was forecast to be hot in the valley on Sunday so we got up early.  After meeting our friends there were some last minute gear adjustments (mounting extra water bottle cages, for example) before we departed.  After leaving Sunnyvale, we rode out past Steven’s Creek reservoir, then up Montebello road.  By the time we reached the climb the sun was high enough to be warm.  Montebello starts out steep as it leaves the reservoir, then gets a little more gentle once it approaches the top of the ridge.  When we reached the end of the pavement (Piaw likes finding dirt roads to ride on), the sun was hot. The 2-track dirt fire road goes right over the top of Black Mountain and we pedaled along, baking in the heat as we crunched through the dusty gravel.  The rolling hills were covered in dry grass, being bleached by the sun. I had already finished two full bottles of water before we reached the top.  Fortunately, on the other side of the peak, there’s a lonely drinking fountain next to someone’s driveway.  I don’t know who the kind landowner was who provided such an oasis, but we were certainly grateful as we stopped to refill our water bottles.

Having crossed the mountain, we had a long descent ahead of us down Alpine road.  Everything was hot at this point; my brake levers and handlebars felt warm to the touch. The air was hot, and dried out our eyes as we sped down the hill.  The road descended down the spine of the hill, playing with the steep ridge, first on one side of the ridge, then crossing to the other side, occasionally winding around a small hill then back to the ridge.  On either side the grass-covered hill dropped away sharply and riding felt like flying as we banked around corners with the landscape far below. Each turn offered views of broad vistas when we were able to glance away from the road.  It is a curse of biking that on the way up the hill you are too oxygen-starved to enjoy the view, and on the way down you are going too fast to look away from the road.  (Of course, one could always ride slower, but that thought rarely occurs in the moment). About halfway down the hill the road made a sharp right turn and dropped off the ridge, plunging into the trees.  It wound its way down to a creek at the bottom of the steep, wooded valley.  The road here was narrow, without a centerline, and the corners were tight.  After the sweeping vistas above it felt cramped, the riding no longer felt like soaring.  The corners demanded attention and plenty of braking.

We regrouped at the bottom of the hill.  Having already conquered the main climb of the day, we only had a few smaller hills between us and the ocean.  The air was already cooler here, and much of the road was through the forest.  We rode on to the small town of Pescadero where we stopped for lunch. 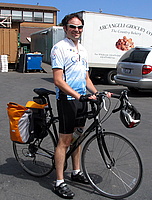 The market sells wonderful garlic artichoke bread fresh from the oven. We bought two big loaves, still warm and moist in the middle, and enjoyed them at the picnic tables on the lawn behind the store.  This close to the ocean, the air was chilly and over the course of the meal we moved out from under the shade of the table’s umbrella to recline in the sun on the grass.  After our meal, we returned to the store for groceries for the evening’s meal.  We picked up pasta, two more loaves of half-baked bread (we would finish baking them at the hostel), and a fresh pie.  All the food was stored away in saddlebags and paniers, except for the pie.  It was delicate, but since Piaw and his girlfriend, Lisa, were on their tandem bike, Lisa was able to hand-carry the pie as we rode.

We left Pescadero via Cloverdale road, a lovely little road that heads south through a small valley, paralleling the coast.  Although we had seen that there was fog closer to the water, Cloverdale road was one hill inland and that was enough to grant us sunshine.  After several miles of rolling past fields, the road got narrower and met up with Gazos Creek road to wind along the creek bottom until it dumped us out on Highway 1 at the ocean.  The weather here was overcast and windy; cold.

It seemed a world away from the dusty, dry heat we had been in just a few hours before, only 50 miles away.  We had a brisk headwind as we backtracked a few miles to the lighthouse. After checking into the hostel, I explored the beaches by foot.  North of the lighthouse was a long beach being pounded by the waves and wind, but south of the lighthouse there was a quiet cove, with stairs down to it.  I had brought a swimsuit, so I went in for a very (very) brief swim.  Although I would have enjoyed the freezing water earlier when we were roasting in the sun on top of Black Mountain, it was much too cold now that the sun was gone.  I got my head wet and then stayed out of the water until we hit the hot tub after dinner. 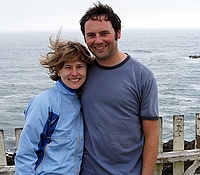 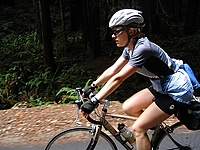 Monday morning we got up early because we had a long ride in to work.  It was cloudy and cold as we rode north along the coast, cutting inland to ride through the rolling hills and farmland.  Our goal was Tunitas Creek road, a beautiful climb up a ravine in a dense redwood forest.  Redwood trees are magnificent in grey overcast weather like this, and the temperature was great for climbing. 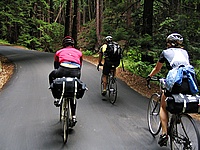 Even though we had only been gone one night, I still had an odd feeling of independence as we rode in to work.  It was similar to what I had felt the previous weekend, on our Point Reyes ride.  There’s something about traveling by bicycle: knowing that you’re carrying whatever supplies you need and that you have the freedom to ride wherever your legs can take you.