Here are instructions for building a model of a Piper Cub airplane from Nanoblocks. 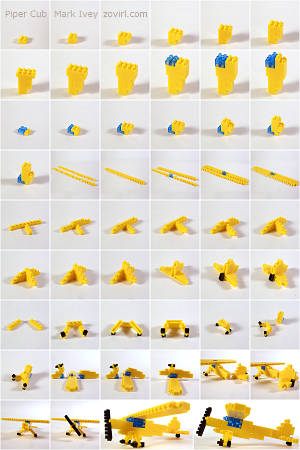 The Cub is a small 2-seat plane that's been around since 1938. Top speed of the original model was 85mph, though later models increased the size of the engine and got the top speed up to 130 for the Super Cub. The body of the plane is incredibly narrow, with one seat in front of the other instead of having the seats side-by-side. The instrument panel on early cubs was incredibly simple: RPM, airspeed, compass, altimeter, oil temperature & pressure, and slip indicator. That's it.

I designed the nanoblock model starting with the wing. The only way to get the wing skinny enough is to build it with the studs facing forward. Studs forward is also useful for attaching the propeller and getting the landing gear at the correct angle, so the whole plane is done with the studs forward instead of up. The size of the model was decided by the number of yellow bricks I had.

Hope you enjoy building it!