Some resources for using XCode with Python. A few introductory sites plus the ones I find most useful on a day-to-day basis:

Here are a few hints about how I set up XCode for Python development.

Run your program from XCode

Some versions of PyObjC have a bug so when you make new projects, XCode doesn’t know how to run them. Make a new custom executable & point it build/Development/myProgram.app.

Having the keyboard shortcut to quit XCode be the same shortcut as quitting your application (cmd-Q) is a recipe for annoyance when you accidently hit it twice. Instead, go into XCode’s preferences and change the key binding to quit XCode to something like cmd-option-Q.

You can shave a second or two off the build-test-fix cycle if you set up a dummy “No Build” target. The Development build target will run every time but behind the scenes it isn’t copying files, it is just making aliases (py2app’s –alias option). Set up a new shell script target which runs /usr/bin/true and you can save the effort.

You have no debugger, but at least use PDB

If you set the USE_PDB environment variable, PyObjC will dump you at a PDB prompt when there is an unhandled exception. You can set this on the “Arguments” tab of the custom executable.

XCode is the IDE that Apple ships with OS X. Although primarily targeted towards C++, Objective C, and Java it also plays well with Python. It is excellent for writing OS X applications in Python thanks to good integration with Apple’s Interface Builder and py2app (the OS X distutils packager).

If you want to write OSX applications using python, XCode is the tool you want. This is thanks to solid integration with Apple’s Cocoa application framework and Interface Builder.

First, the bad news: no debugger. XCode has a debugger but it doesn’t work with Python. You’ll have to use another tool like PDB instead. 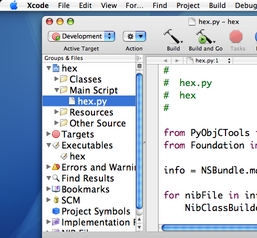 Except for the debugger, the rest of the environment is nice. The UI feels like a proper OSX app, with all the standard keyboard shortcuts and controls, so you’ll feel right at home.

The UI is very flexible, and can accommodate a single fullscreen window or multiple separate windows for each file. 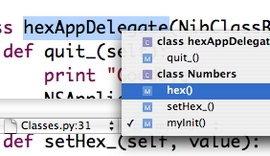 Standard features here. Syntax highlighting, split panes, menus to jump straight to a class or function. Content assist exists, but leaves something to be desired. I have yet to see a content assist for python that is able to keep up with the dynamic nature of Python classes, however. 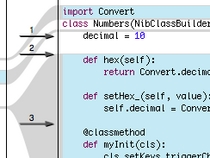 “Find in Project” lets you search your entire project. Bookmarks let you quickly jump to common sections of code

XCode is a great environment for Cocoa development. PyObjC provides the Cocoa bindings for Python, and once it is installed XCode knows how to make a new Python project. The distutils setup.py script is handled for you and you can create your .app bundle by clicking Build 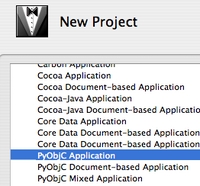 Interface Builder lets you set up your widgets. Helpful guides pop up to help you position your widgets according to the Aqua guidelines.

…and then Drag-and-Connect your buttons

Hooking up buttons to actions in your Python objects is just a matter of ctrl-dragging from the button to the object.